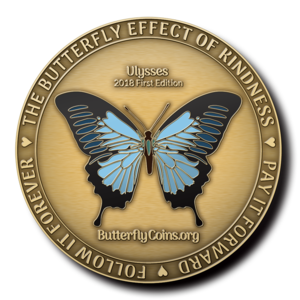 Pastor John loaded up my car with groceries for a family in Fernley, NV who is struggling with health issues and overwhelming debt. It was way and beyond the normal food donation, as it was bags and bags of food to hold them over. He gave me this coin to pass on to someone else. I hope this coins story continues!!

When I was in Sandpoint, I dropped a $100 bill on theSandpoint, ID, USA floor at the Chevron gas station. After I had left, I looked in my pockets and realized I was missing $100 so I raced back to the gas station and Richard the cashier had told me that some kid had turned it in. I asked Richard to track down that kid for me so I could thank him for turning in my money, and I told my boss at Talus Rock Retreat about what had just happened and how we should put the kid in the newspaper for his good deed. My boss handed me a Butterfly Coin and told me to pass it on...sadly Richard the cashier never saw the kid again and I could not give the kid the Butterfly Coin! So now I have this Butterfly Coin and Im just waiting for the right person to pass it off to.